This article originally appeared in Correctional News on October 1, 2021 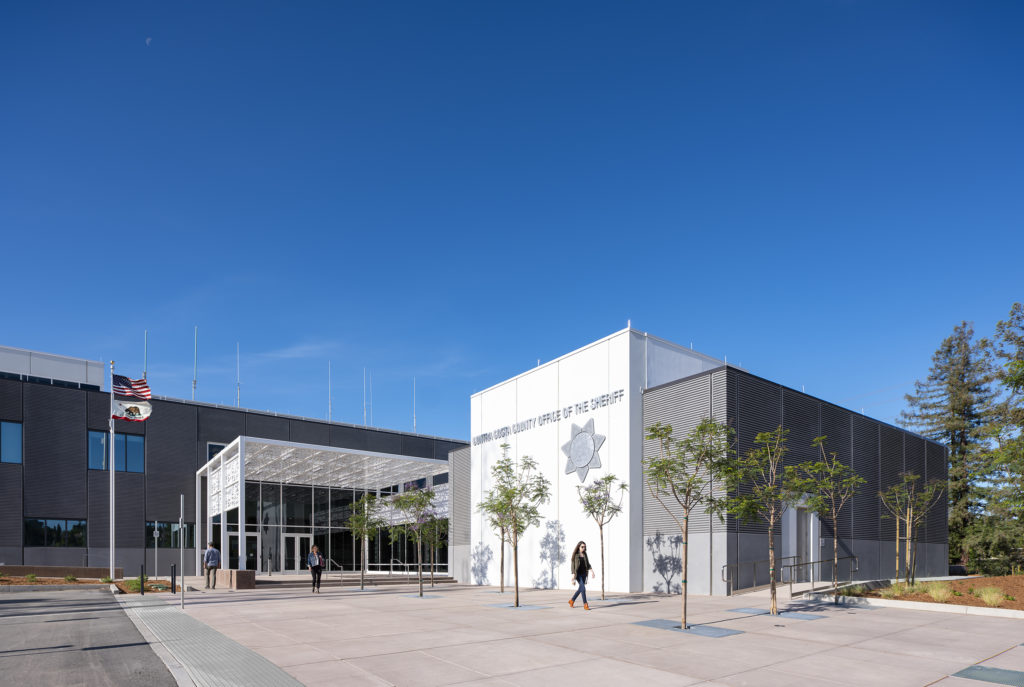 Every now and then, a construction project becomes a career highlight — not only is it challenging, but there’s a critical need for the facility, a stellar project delivery team and a client who truly believes your role is imperative to the success of their facility. Even if you hit speed bumps along the way, perhaps a global pandemic and record state fires, the synergy between parties allows the project to move full steam ahead.

This is how Fred Avery and Ron Mastalski of Vanir describe their experience managing the construction of two buildings simultaneously for Contra Costa County.

Construction of the new emergency operations center/public safety building (EOC/PSB) and new administration building started in the spring of 2018. These were two much-needed facilities built to replace a 1950’s era, 12-story office tower in downtown Martinez, California. The County and its residents had been trying to make this project a reality for 30 years. The LEED Gold certified facilities were delivered under one design-build contract, a strategy recommended by the Vanir team, and completed in July of 2020 with a total construction cost of $110 million. This was the County’s first significant design-build project.

“I feel like I am contributing to the betterment of my own community…to help them finally achieve this was something I am proud of,” said Mastalski, who lives in the county and managed the four-story, 72,000-square-foot administration building project, which was completed by the design-build team of Hensel Phelps with Fentress Architects. “We had support at the highest levels of the County and this enabled us to do things that might have otherwise been delayed.”

Avery oversaw the construction of the EOC/PSB, located six miles southeast from Mastalski’s project, a two-story, 38,000-square-foot facility completed by Hensel Phelps with Dreyfuss + Blackford Architecture. The EOC/PSB serves as a centralized campus for sheriff’s administration, field operations, communications, the coroner and the emergency services division. It is equipped with state-of-theart disaster management and public safety technology and designed to operate independently should utilities become unavailable during an emergency.

“There was no time like the present,” said Avery. “When we were building this, California was facing statewide fires and the emergency services division was fully activated.”

According to Avery, the technology portion of the building quickly became the most important and complex part of his role. The sheriff’s situation center contains a video wall spanning 32 feet wide by 14 feet tall and composed of 48 LCD screens, capable of displaying dozens of digital feeds and streaming content from other agencies. Avery managed the design of the radio antenna and mounting systems, working closely with County Sheriff-Coroner David Livingston to ensure that his staff was provided with technology that it could manage, and appropriate training to do so, from the first day they transitioned to the new facility.

“It’s difficult to capture the complexity involved with this undertaking, specifically the technology required to meet 21st century needs that allows our office to deliver the best service to over one million County residents,” said Livingston.

“Vanir guided the sheriff’s office through the entire process, serving as an advisor we could always look to for guidance, effectively managing the design-build team…and resolving issues quickly at the field level.”

Vanir is proud to be a part of building these state-of-the-art facilities, which have won awards from the Construction Management Association of America, the Design-Build Institute of America, the American Public Works Association and the International Partnering Institute.

“We went above and beyond what a typical construction manager would be expected to do,” said Avery. “The client trusted us implicitly to make good decisions on their behalf. They felt we were going to give them the best we could no matter what.”

“When you get someone who trusts you and has faith in you, it makes you feel like you can do anything,” said Avery.