This article originally appeared in Correctional News on October 7, 2020 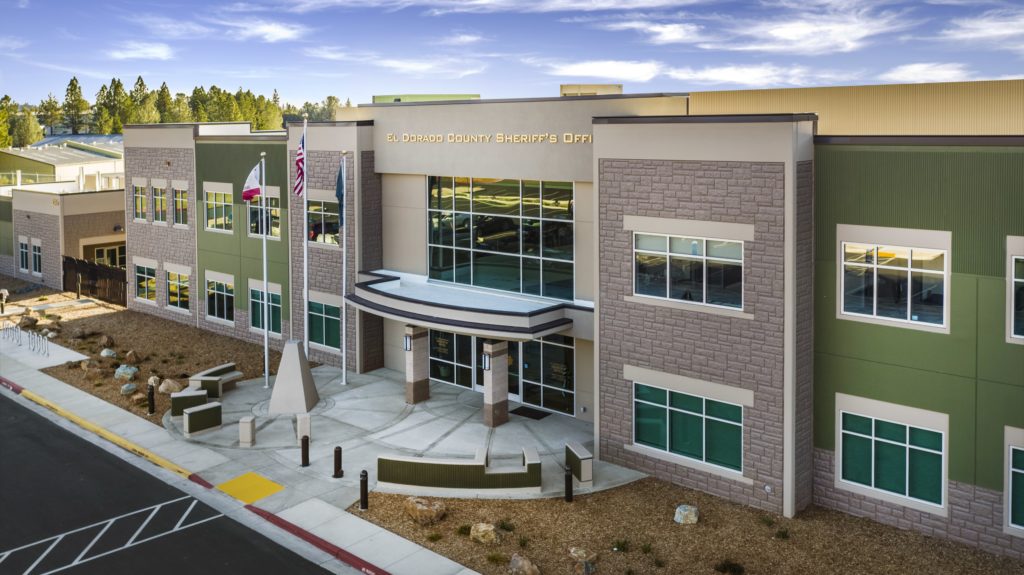 It’s possible that each person involved with building the El Dorado County Public Safety Facility (EDCPSF) may have a different opinion of what makes it such a significant project. According to Kaitlin Rathe of Vanir, it goes well beyond being on time and within budget—it was the ability to consolidate 7 buildings and 15 sheriff units into one single campus and to witness the level of operational efficiency that was borne from that physical consolidation.

Rathe served as the on-site project manager for the new facility, a design-build project constructed during a record-breaking rainy season and completed in November 2019. It is located in the rural and scenic county of El Dorado (outside the city of Placerville), in east-central California. Vanir’s project director, Eric Goodman, oversaw activities and brought 35 years of industry experience plus a background of working in law enforcement. Together with the County, Arrington Watkins Architects (architect of record), Architectural Nexus (criteria architect) and the joint venture of Clark/Sullivan Construction and Broward Builders, they delivered what has been recognized by the Construction Management Association of America’s Northern California Chapter as a 2020 Project Achievement Award winner.

“Vanir’s project management team was among the best I’ve ever worked with,” said Goodman, whose career has included managing the repairs of the Pentagon after the 9/11 attacks, overseeing projects for the Federal Bureau of Prisons and providing SWAT and firearms instruction as a Louisiana State Trooper. “Kaitlin Rathe’s demeanor, attention to detail and professionalism were key in the success of the project.”

The EDCPSF is a 110,000-square-foot, five-building complex that serves as the administrative and operational headquarters for El Dorado Sheriff’s Office. Built on 12 acres of a 30-acre site, it features a Public Safety Building with Emergency Operation Services and a 911 Dispatch Center. The campus also includes a morgue; an evidence building; a special operations and training building; and an indoor, 10-lane, 50-yard shooting range and armory.

“There were several very complex aspects to this project and Vanir helped guide the County and manage the contractor throughout the entire project,” said Russ Fackrell, facilities division manager for El Dorado County.

Doris Kelly, senior project manager for Clark/Sullivan, recalls the construction period as one of the worst winters in years, but says the team kept pushing forward to completion.

“During the groundbreaking celebration, Sheriff D’Agostini promised the community that Clark/Sullivan Broward would deliver the project on time, 24 months from the start of design to owner move-in,” said Kelly. “In that moment I knew we could not let the community down. At one point we had over 110 tradespeople in the field working on the 5 different buildings. The collaboration between the entire team was a huge part of the success.”

Prior to construction of this centralized facility, sheriff’s services were spread out among several satellite buildings, many of which were more than 50 years old. The plan to consolidate into a modern location to serve the growing community had been in the works for decades, but funding had challenged this process.

In 2013, Vanir conducted an operational assessment and facility study of the County’s sheriff’s facilities that determined the existing headquarters building was at “end of life” and the cost to upgrade the facility, including ADA requirements, was not justified.

Following this report, Vanir guided the County with the preparation of a 400-page pre-loan application for the new facility, which secured a low-interest, long-term loan ($57 million) from the United States Department of Agriculture.

Vanir is proud to have been instrumental in identifying the need for a new facility, steering the process for obtaining the loan and finally, managing the design and construction of a state-of-the-art complex. As noted in a County press release from March 2018, operational costs will be reduced through energy efficiencies and eliminating rental expenses, and direct lines of communication will now exist between various operations.

“The facility is conducive to efficient operation and that means everything in a sheriff’s operation,” said Goodman.

When reflecting on why this project was such a success, Goodman noted that the client actively participated and provided early insight on how the facility would operate (both now and in the future), and that the design-build entity was very responsive and communicated effectively with the rest of the project team.

Rathe adds that from a team perspective, the delivery method helped eliminate some typical communication silos that exist on correctional-adjacent projects. It allowed countless opportunities for collaboration with team members who may otherwise have been on the “other side” of the contract.

“I will forever value the relationships I built, the visible satisfaction of the end users when I visit and the countless design and construction lessons I learned,” said Rathe. “This happens to be the sheriff’s department I grew up around, so I have many reasons to hold this project close.”