This article originally appeared in School Construction News on April 10, 2019 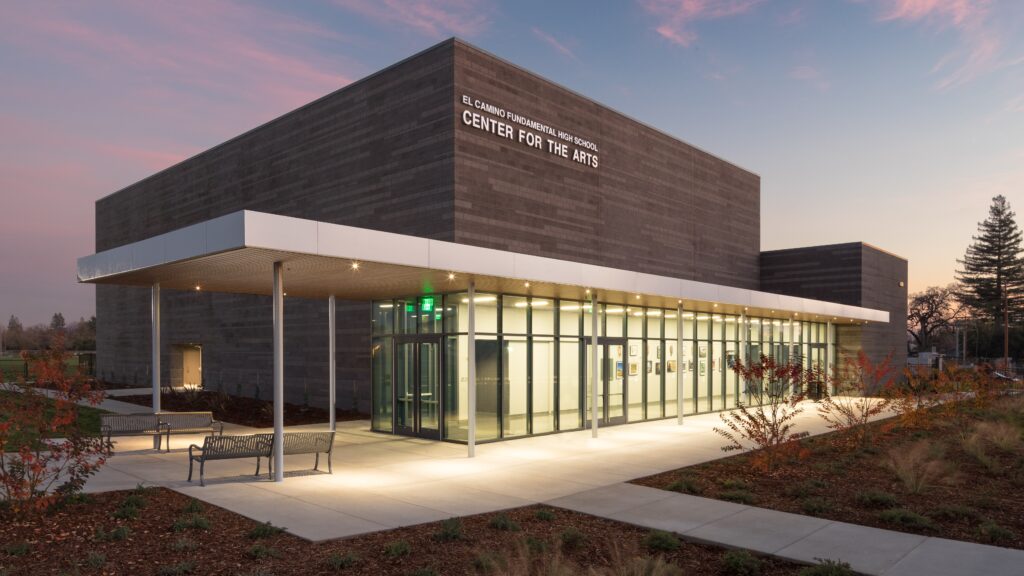 San Juan Unified School District has been working with Vanir Construction Management on its bond programs in Sacramento County for the past 23 years. A recently completed project is a new Center for the Arts at El Camino Fundamental High School, which received a 2019 Project Achievement Award from the Construction Management Association of America Northern California Chapter for “New Buildings Under $20 million.” The 14,400-square-foot, state-of-the-art venue includes a tiered theater of 500 fixed seats and 100 portable seats in the orchestra area. This was the District’s first progressive design-build project—it was executed by Vanir, McCarthy Building Companies and HGA, and completed 28 working days ahead of schedule.

Progressive design-build? The term is definitely appearing more and more as owners are choosing to capitalize on the ability to collaborate with the design-build team and identify and mitigate risks earlier in the design phase, resulting in a Guaranteed Maximum Price (GMP) that reflects the actual cost to build the project. As stated in the October 2017 issue of Design-Build Done Right™ Primer, a Design-Build Institute of American publication, “Progressive design-build uses a qualifications-based or best value selection, followed by a process whereby the owner then ‘progresses’ towards a design and contract price with the team…the design-builder is retained by the owner early in the life of the project and, in some cases, before the design has been developed at all.”

Brett Mitchell, former director of facilities, construction and modernization for San Juan Unified School District, was the visionary behind using progressive design-build for the Center for the Arts project, which began in the summer of 2016.

“While at the District, I was delighted to see this project come to life and contribute to the students’ involvement in the arts community,” says Mitchell. “The project was managed professionally by individuals who understand the technical aspects of design and construction yet have an effective ability to communicate with District staff and more importantly, the users.”

Due to the nature of the Center for the Arts facility, working closely with the end users (the band, choir, art, and drama teachers), as well as the entire surrounding community, was critical. The school was originally constructed in 1952 and had zero accommodations for arts programs, and the excitement surrounding this project was astronomical.

“You know you have a good project on your hands when the entire team (owner, CM, architect and builder) come to the table understanding the common goal of bringing a long-time band teacher’s dream to life,” says Ian McQuoid, project director for McCarthy. “The project started this way and finished even stronger. We had a high performing team that truly understood the power of collaboration.”

Vanir was brought on during the RFQ/RFP stage, initially guiding the process to ensure that all applicable state regulations were followed correctly in this first-ever progressive design-build project for the District.

Vanir oversaw several design iterations for the new facility. The project proved to be a unique undertaking with complex theatrical lighting, audio/visual, and rigging. There were very stringent acoustical requirements. The end users were involved and kept up-to-date at all stages of design development to ensure their specific requirements were met. The project team used enhanced BIM coordination to detail the facility in three-dimension, brought on an acoustical engineer early in design, and coordinated with the engineer throughout the entire project.

“As an architect, it was an honor and pleasure to work with this incredible team,” says Creed Kampa, design principal for HGA. “From the owner to the program and construction manager to the builder, everybody collectively committed to quality from the very beginning.”

During the Bidding Phase, Vanir carefully reviewed and verified the GMP, including the schedule, estimate, and subcontractor bids, to ensure the District would receive high quality and best value for the project. Throughout the 18-month construction schedule, strict protocols were set for the flow of information and cost controls between Vanir and the District, consultants, QA/QC teams, the Inspector of Record, and the design-builder.

“The cohesiveness and camaraderie amongst the entire team made the project a real pleasure to be a part of,” says Andrew Dessling, senior project manager for McCarthy.

A special opportunity for the project team and the District occurred during construction—the ability to create a real-life learning experience for students of all ages. Vanir arranged tours for high school and college students. This allowed the students to explore the complexity of the facility and gain insights into the reality of a multi-million-dollar progressive design-build project.

“Fully geared up with hard hats, vests, safety glasses and gloves, permitting staff and students on the construction site was extremely unique and speaks to the connection Vanir created with El Camino High School…they created a live learning environment that would be impossible to get out of a textbook,” says Kevin Glaser, band director for the high school.

The questions during one tour with high school students were amazingly poignant and towards the end, a student asked the Vanir staff, “What do you look for in a young construction manager?” It was a chance to provide quality, one-on-one advice.

Completed in October of 2018, the much-needed new Center for the Arts is now used for a variety of school and community functions, including assemblies, lectures, drama performances, band and orchestra concerts, choral and dance performances, and video presentations. It has an outdoor amphitheater and an impressive lobby with view dynamic glass that is also used as an art gallery.