This article originally appeared on the Water Online website on April 22, 2020 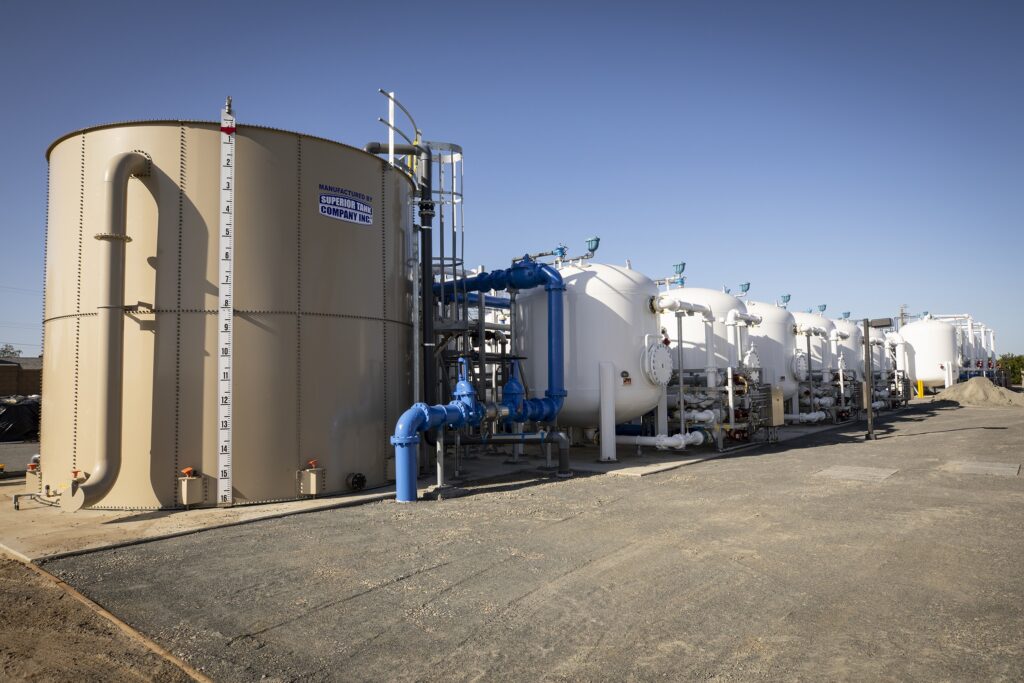 Receiving a compliance order from the California Water Board’s Division of Drinking Water (DDW) was not the worst thing that ever happened to the City of Lemoore. It set the wheels in motion for a unique technical solution to historic groundwater problems and a progressive design-build approach to accelerating delivery of high-quality drinking water with only one-fourth the operating expense (OPEX) of other treatment alternatives.

Outside-the-Box Approaches Neutralize Off-The-Charts Problems
The original reason behind the 2014 DDW consent order was repeated exceedance of the 80 mg/L maximum contaminant level (MCL) for total trihalomethanes (TTHMs) in the city’s drinking water. The TTHMs were disinfection byproducts (DBPs) generated by chlorine disinfection treatments that reacted with high levels of total organic carbon compounds (TOC). But that high TOC was just one aspect of the complicated mix of naturally occurring components in the local groundwater, including ammonia, iron, color, sulfides, and arsenic.

The city in California’s Central Valley explored a number of potential options and entertained some traditional water treatment proposals intended to address the multicontaminant problem. Unfortunately, most of them either did not treat all of the related contaminants or relied on large volumes of chemical additives that would create large volumes of waste and high operating costs (OPEX) that were unaffordable by the city. When one vendor proposed removing the problematic precursor elements in the groundwater before disinfection, the city manager was interested in how that might keep OPEX low. The city approved a pilot test program to quantify how previously proven technologies assembled in a unique new sequence might negate the natural groundwater problems without creating new and expensive man-made DBP issues. Three phases of pilot testing over a one-year period helped to refine and prove the concept.

In 2018, the city embraced the integrated treatment system consisting of a combination of ozonation, granular activated carbon (GAC) filtration with biological activity, plus ion-exchange (IX) resin before post-chlorination to meet TTHM limits and improve the water’s aesthetics, taste, and odor. In addition to reducing DBPs, that approach also helped to maintain a more consistent and dependable free-chlorine residual in the treated water distribution system that had long plagued the city.

The good news was that the piloted technique for removing problematic components in the groundwater minimized chemical treatments, waste stream disposal costs, and water losses while requiring only 25 percent of the OPEX compared to previously proposed solutions. For example, chlorine usage was reduced by 85 percent, and coagulants and high-dose iron compounds were eliminated. Also, liquid discharge was limited to a low volume of non-hazardous brine that could be treated offsite — no small consideration in a state and region where precious groundwater resources are already under stress. Even better news was that the city could speed up implementation of the solution using a progressive design-build approach.

Progressive Design-Build Advantages
Due to the complex challenges of naturally occurring components in the groundwater around Lemoore, the overall project — capable of delivering 10,500 gpm of clean, clear water — is one of the largest groundwater treatment projects in the U.S. in 2020. The progressive design-build approach to the project was geared to allow the $32-million project to be built in a 400-day contract period to meet the Q4 2020 deadline imposed by the DDW consent decree. It took advantage of a collaborative process to maintain cost-efficiency while accelerating the implementation process that allowed construction to begin under a guaranteed-maximum-price (GMP) proposal when the design phase was only about 60 percent complete.

The skillsets used in the final implementation included AdEdge’s water treatment technology, Hazen & Sawyer’s project design, JR Filanc’s general contractor role, and Vanir’s overall project management. The choreography of the entire process — pilot-testing, optimization, evaluation, design, construction, long-lead-time purchases, and component delivery — was critical to the success of the one-of-a-kind project. For example, with long lead times for certain large components in the design, the progressive design-build approach incorporated staged ordering and shipping of components in the sequence of the construction schedule.

The Bottom Line — Customer Satisfaction With Better CAPEX, OPEX
The bottom line for the City of Lemoore was to improve the quality of water vital to the city’s residents, existing businesses, and new businesses they hoped to attract with high-quality, publicly supplied water. One of the city’s larger employers — a cheese production facility — had long been concerned with the quality of water it needed for its production processes. The new water quality demonstrated in the pilot plant refinements will go a long way toward making the area attractive for businesses that depend on a reliable supply of high-quality water.

Developing the innovative and novel combination of treatment technologies not only delivered the desired water quality outcomes for Lemoore, it did so at a long-term OPEX of approximately $0.46 per 1,000 gallons. That is about one-fifth the $2.50-per-1,000-gallon costs being paid for more chemically intensive conventional treatment approaches used by other nearby municipalities. Finally, using the progressive design-build approach is accelerating completion of the facilities that will deliver those desirable outcomes sooner and at a lower capital expense (CAPEX).