This article originally appeared in Peninsula Daily News on July 9, 2020 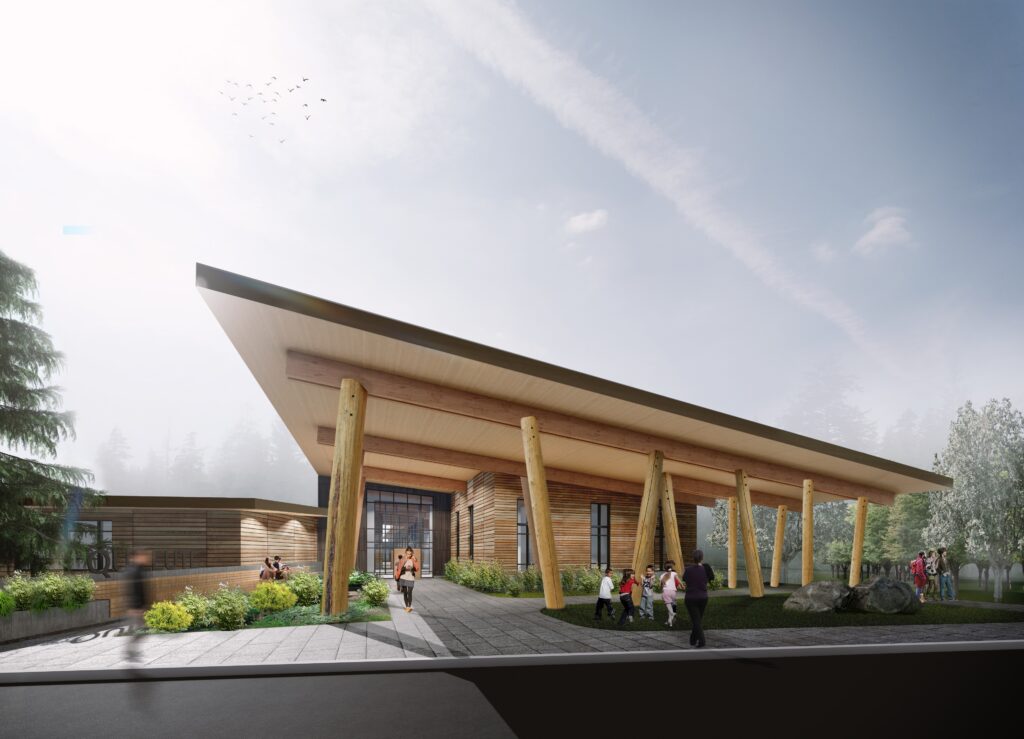 After years of planning, the Quileute Tribe has broken ground on a massive project to move its school out of the tsunami zone into a shiny new campus on higher ground.

The tribe conducted a groundbreaking ceremony and blessing for the new school last Thursday. About 50 mask-wearing attendees were on hand.

“Today our dream becomes a reality,” Quileute Tribal Chairman Doug Woodruff said in a statement provided by the tribe.

“After almost a decade in the making, next week we start the construction of our brand-new school.”

Construction of the school began Monday and is scheduled to be completed in May 2022, Quileute Tribe Operations Manager Emily Foster said.

The school is the first phase of a multi-generational effort to move tribal facilities and housing out of the tsunami and storm-prone lower village at La Push on the Pacific coast to a 278-acre tract on higher ground.

The Move to Higher Ground site is about 2 miles southeast of the lower village and about 250 feet above sea level.

Federal legislation signed by President Barack Obama in 2012 transferred hundreds of acres of former Olympic National Park land, including the higher ground site, back to the Quileute Tribe.

“Relocating the tribal school to higher ground is truly a matter of life and death to the Quileute people,” Woodruff said.

Future phases of the Move to Higher Ground will relocate the tribe’s senior center, administrative buildings and homes, Foster said.

In 2018, the Quileute Tribe received a $44.1 million grant from the Bureau of Indian Affairs to move its 100-student school from the lower village to a 60,950-square-foot campus on higher ground.

“It’s for our students. We’re so excited.”

Geologists say a magnitude-9.0 earthquake could re-occur at any time along the Cascadia Subduction Zone and send a 40-foot tsunami crashing into low-lying coastal areas like La Push.

The last Cascadia megathrust earthquake and tsunami occurred at about 9 p.m. Jan. 26, 1700, according to the geological record and written accounts of the tsunami reaching Japan.

Winter storms also pose a hazard for Quileute students, who attend classes a short distance from the surf.

In late 2018, the tribe hired Vanir Construction Management Inc., which has a Port Angeles office, to oversee the design and construction of the new school.

“Living and working on the Peninsula, our team understands the importance of this project to the tribe and the Quileute youth, providing a safe and modern facility to learn and grow within the Quileute culture and heritage,” said Vanir Project Manager Craig Fulton, a former Port Angeles public works and utilities director.

“Our team will serve the tribe as the owner’s representative, guiding the tribe, contractors and consultants through the design, procurement, construction and final move-in phases.”

It was announced Wednesday that Graham Construction & Management of Seattle had been hired to design and build the school.

“Our team has a keen sense of the urgency and responsibility to design and build this new school with attention to the Quileute environment, culture and especially the children,” Graham Project Manager Nancy Hawke said in a statement provided by the tribe.

“I am personally looking forward to seeing their smiles on the first day of school in their new building.”

Quileute officials said the groundbreaking ceremony was kept small due to limited space and COVID-19 restrictions. All attendees were required to wear a mask, Foster said.

The ceremony began with a song and prayer by Quileute elder and minister Tommy Jackson and included remarks by Woodruff, Penn and former school board member and elder Roger Jackson Sr.

Woodruff and Penn then donned hard hats and broke ground on behalf of the tribal council and school board, Foster said.

“This ceremony celebrates the Quileute Tribe’s perseverance to preserve their culture and secure their future for generations to come,” Foster said.